All the cinematic references in Far Cry 3: Blood Dragon 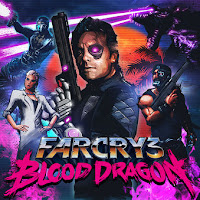 I know this blog is predominately about films but having just completed the awesome PSN game Far Cry 3: Blood Dragon last night I felt compelled to write an entry about this. For those that haven't heard, Blood Dragon is a standalone spin-off from the wildly successful Far Cry games. Essentially, they've taken the previous game Far Cry 3, a first person shooter set on a tropical island, and reworked it so that it's set in a post-apocalyptic future instead. The internal game mechanics are exactly the same but the plot is completely unrelated.

When the first details of Blood Dragon were released a month or so back I think most gamers thought it was a hoax. For one it seemed more like the kind of crazy "mod" a fan would make and secondly the first poster for it was released on April Fool's Day. The game is basically a huge, beautiful love letter to the cheesy films of the 1980s.

You play as Sergeant Rex Power Colt, a cyber commando fighting a war against the evil Colonel Sloan and his cyborg army Omega Force. You start the game on Sloan's huge island and one by one you have to take down his bases using your stealth skills and a ton of insanely powerful weapons. That may seem like a walk in the park but you'll also need to be careful to avoid the deadly blood dragons - huge dinosaur-like creatures that shoot lasers from their eyes.

As a child of the 80s this game is absolutely amazing. I'm going to list all the references I spotted in the hope that it might encourage others to play it (believe me there's probably a ton I missed).

The Terminator (1984)
- There are several references to Jim Cameron's film. First and foremost is the casting of Michael Biehn as Rex Power Colt who played Kyle Reese.
- Rex's cyborg eye looks very similar to the T101 when it slices the flesh around it's eye off.
- Rex's love scene with Dr Darling is clearly a call back to Kyle love scene with Sarah Connor.
- The game opens with a tune very similar to Brad Fiedel's iconic theme.

Terminator 2: Judgment Day (1991)
- The shotgun that Rex uses has a similar flip cock technique that Arnie uses in that film.

Aliens (1986)
- Mission 4 - 'What the S**t' - has you use a flame thrower to burn a Blood Dragon's nest of eggs, just like Ripley. Later on in the same mission, you furiously use the flame thrower to push back two Blood Dragons while you wait for an huge lift to come down.

Red Heat (1988)
- Colonel Sloan's base is called Danko Base which is probably a reference to Arnie's character Ivan Danko in Red Heat.


No Surrender, No Retreat (1986)
- When Rex has a training montage towards the end of the game the song 'Hold on to the Vision' by Kevin Chalfant plays in the background.

Rocky IV (1985)
- The training montage is heavily based on Ivan Drako's training montage in Rocky IV with Rex using a running machine and doing push-ups.
- The name of mission 7 is "I Must Break You"
- Early on in the game there is shot of Rex's fist hitting Sloan's fist and exploding just like the gloves did in at the start of Rocky IV.
- Also the final level has the song 'War' by Vince DiCola from this film.

Miami Connection (1987)
- The song 'Friends' by Dragon Sound plays out over the end credits.

Krull (1983)
- Towards the end of the game you go on a quest to find a mystical weapon called the Killstar which is very much like the Glaive from Krull.
- The Omega Force use laser guns just like the 'slayers' in Krull.

Commando (1985)
- Colonel Sloan seems very much inspired by Bennett from Commando and gives a speech about he and Rex being similar at the end.
- Also the ridiculous sounding name Rex Power Colt is definitely a homage to the crazy names action heroes had in 80s film like John Matrix and Mason Storm.
- Also there's a montage early on showing Rex suiting up with all his weapons that is definite homage to the one from Commando.

Cobra (1986)
- The name of mission 5 is "I Don't Deal With Psychos I Put Them Away" which is a line said by Sylvester Stallone in this film.

Tron (1982)
- Obviously, there's heavily influence from Tron in the set design of the forts you take over. Neon red edges is everywhere and each fort has a light beams that shine right up into the sky.

Predator (1987)
- Opening level involves you firing a chain gun out of a helicopter while Little Richard's 'Long Tall Sally' plays in the background.
- Some of rumbling ambient music is definitely inspired by Alan Silvestri's tribal score for Predator.

Revenge of the Ninja (1984)
- Rex's partner is called Spider and wears a ninja mask which is obviously referencing the explosion of ninja films that came out in the 80s. I've just picked my favourite one.

The Last Dragon (1985)
- The Killstar weapon gives you the ability to shoot glowing laser bolts from your fingers not unlike Leroy in The Last Dragon.


Teenage Mutant Ninja Turtles (1990)
- One side mission involves you going down into the sewers under one of the bases where you have to kill four (un-mutated) turtles! Pizza boxes are strewn around everywhere.

Conquest (1983)
- Not sure if this is intentional or not but the neon blue bow and arrow Rex uses looks very similar to the one in Lucio Fulci's film Conquest.

The Karate Kid (1984)
- There's a shot of Rex practises tai chi against a sunset just like Daniel and Mr Miyagi.

Robocop (1987)
- Rex's robotic arm seems definitely based on Robocop's arm.
- Rex's pistol also seems identical to Murphy's trademark gun.
- At one point Sloan shuts Rex down in the same way that Dick Jones shut down Robocop when he confronts him in the 1987 film.

Transformers TV show/Cadillacs and Dinosaurs TV show/He-Man TV show/Flight of the Navigator (1986)/The Last Starfighter (1984)
- The final mission sees you have to pilot a Titanium plated cyber-dragon which could be a reference to dinobots, He-Man or Cadillacs and Dinosaurs. Maybe I'm reading too much into it but I felt the indestructibility of the dragon was quite similar to the spaceship from Flight of the Navigator or The Last Starfighter too.
- Also when Rex picks up the Killstar weapon he says "I've got the touch, I've got the power" - paraphrasing Stan Bush's excellent song from Transformers: The Movie.

Mortal Kombat (1995)
- The portal that Rex takes to the parallel dimension looks just like one of the sets in Mortal Kombat.

Blade Runner (1982)
- One of the random henchmen can be heard saying "I saw attack ships off the shore of Uranus."

So, that's all the ones I found but there's probably a whole load I missed. Bottom line is that if you like any of these films you owe it to yourself to get this game.
Posted by Jack Thursby at 9:19 AM

Other blogs you should really be reading

The goal of Collected Cinema is to sift through movies of the past and try and find the positives. So many reviews nowadays focus on ripping films apart, I'm trying to do the opposite. Every movie I watch - no matter how bad - gets 5 good points and 1 bad point. No star or number ratings here. I want everything to be on an even keel.